The gear-laden, high technical helicopter excursions of today’s outdoor films may seem to be a recent addition to the sport of skiing, yet the history of heli skiing actually began over 50 years ago and has been gradually progressing ever since.

Less than 20 years after the continental U.S.’s first ski resorts began attracting visitors, enthusiastic pioneers in Alaska and Canada were pushing the limits of alpine skiing by searching for new terrain that could only be accessed via helicopter. Although a few small heli skiing operations were started in the late 1950s, Austrain immigrant Hans Gmoser is credited with pioneering the commercialization of the sport in 1965 when he began taking skiers into remote regions of the Bugaboo Mountains in British Columbia.

Despite a small group of dedicated and ambitious skiers, the history of heli skiing never saw a major migration to these initial operations. The sport remained a mecca for those athletes who were driven enough to relentlessly pursue first descents on some of the world’s most impressive peaks and mountain ranges and it became somewhat of a status symbol for skiing’s elite.

Improvements in gear, industry standards, access to information, and safety procedures have made heli skiing into what it is today and have allowed heli skiing operators to attract a far wider market of skiers and snowboarders. Taking part in a heli skiing adventure now requires little more than a decent level of experience on the snow and a weekend off from work. Highly advanced helicopters get riders to and from extreme destinations with ease while new safety equipment and knowledge of snow conditions significantly reduce the level of risk that has been historically associated with heli skiing pursuits. 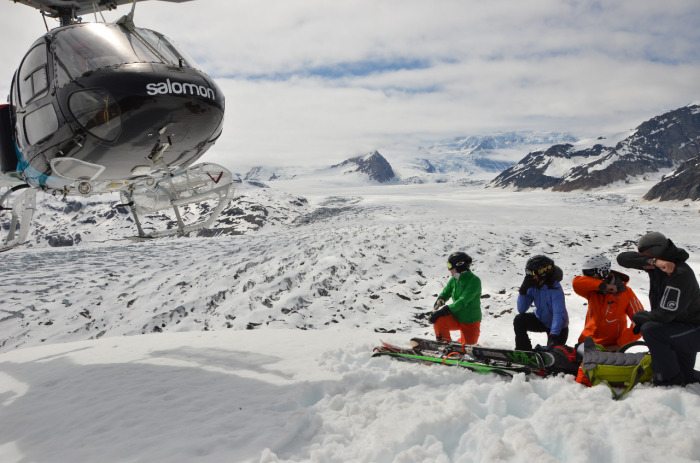 The history of heli skiing has come a long way.

Heli skiing has developed over the last half century as a direct result of individuals wanting to push their own limits and the limits of the sport they love. If you want to explore your own boundaries and become part of heli skiing’s next chapter, check out Tordrillo’s dates and dates & reservations page and discover how to experience a heli skiing or boarding trip of a lifetime.

Started nearly 20 years ago, Tordrillo Mountain Lodge boasts the best heli skiing in Alaska and embodies a culmination of the rich history of heli skiing. The Lodge’s backcountry guides are some of the most accomplished in the industry and offer unrivaled adventures for skiers and snowboarders of all skill levels and backgrounds.