An Olympic gold medalist, a mountain-climbing guide who has reached the summit of Mt. Everest 15 times, and a doctor who has spent over 10 years heli skiing are just a few of the guides you’ll meet at Tordrillo Mountain Lodge. Our certified Alaska heli skiing guides are easily among the most experienced in all the world—and, we think, the most fun-loving. 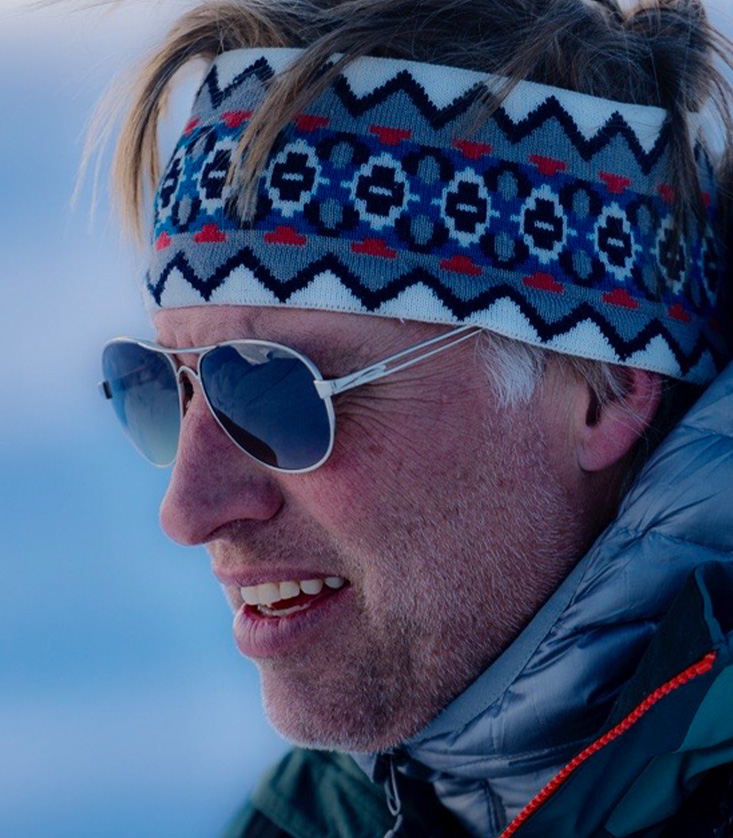 We call him Overchill. After 20 years of pioneering and guiding heli terrain, along with his extensive experience as a snow blaster, avalanche consultant, and wilderness guide, Mike Overcast has become regarded as an expert in anything that involves snow in Alaska, having guided skiers in Valdez, Girdwood, Seward, Hatcher Pass, and in the Tordrillo and Neacola Mountain ranges.

In addition to being an owner of Tordrillo Mountain Lodge, he was a founding partner of Chugach Powder Guides where he worked with some of the best avalanche experts in the industry including Dave Hamre and Frank Coffey.

Born and raised in Jackson Hole, Wyoming, he has been pioneering river corridors throughout Southcentral Alaska since 1992 when he and business partner Tommy Moe started their first outfitting business, guiding guests down some of the most difficult whitewater rivers in Alaska. Today, he splits his time between Jackson Hole and Tordrillo Mountain Lodge, spending winters skiing and boarding and summers fishing and running whitewater. Mike’s certifications are WFR, OEC, Level 3 Mechanized Heli ski guide, and BLS. 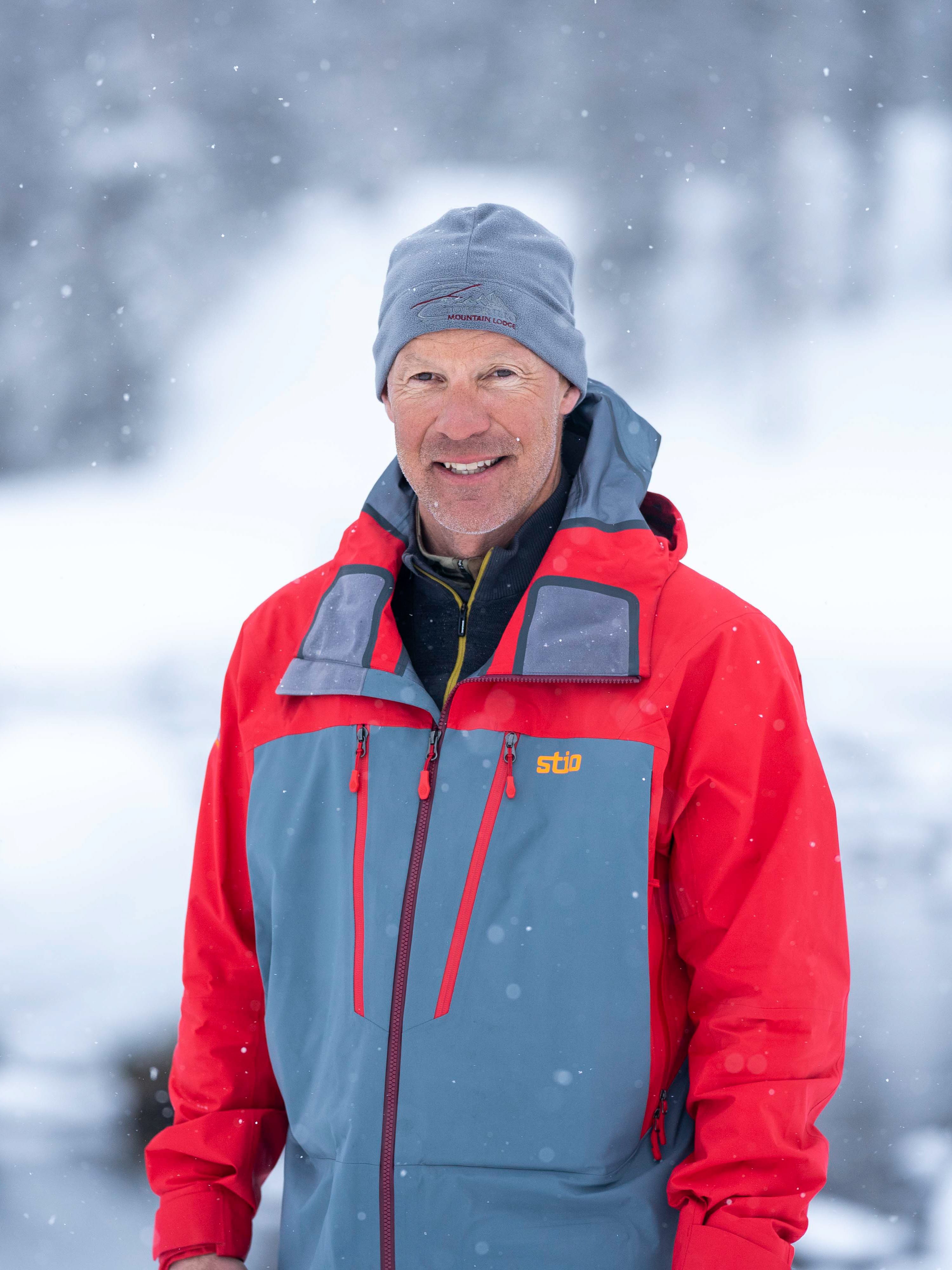 Since his grade school days when his father let him play hooky to ski powder, Tommy Moe knew that the sport would be part of his future. What he didn’t know was that he would become a world cup contender and take home an Olympic gold medal. In 1994, at the winter games in Lillehammer, Norway, Moe won the downhill by .04 of a second, followed by a silver in the Super G.

He also didn’t know that he would strike gold again when he discovered skiing in the Tordrillos. As a partner and founder in Tordrillo Mountain Lodge, Moe finds the greatest reward in sharing the property and newly-discovered terrain with skiers and snowboarders seeking the trip of a lifetime, whether it’s a week of powder skiing in the winter, whitewater rafting the Tal and Coal Creek or paddle boarding under the summer midnight sun.

Tommy has been skiing and rafting the Alaska wilderness for over 25 years. He has intimate knowledge of the mountains and rivers and has been a certified WFR since 2000. He resides in Jackson Hole, Wyoming, with his wife Megan Gerety and two young daughters Taylor and Taryn. 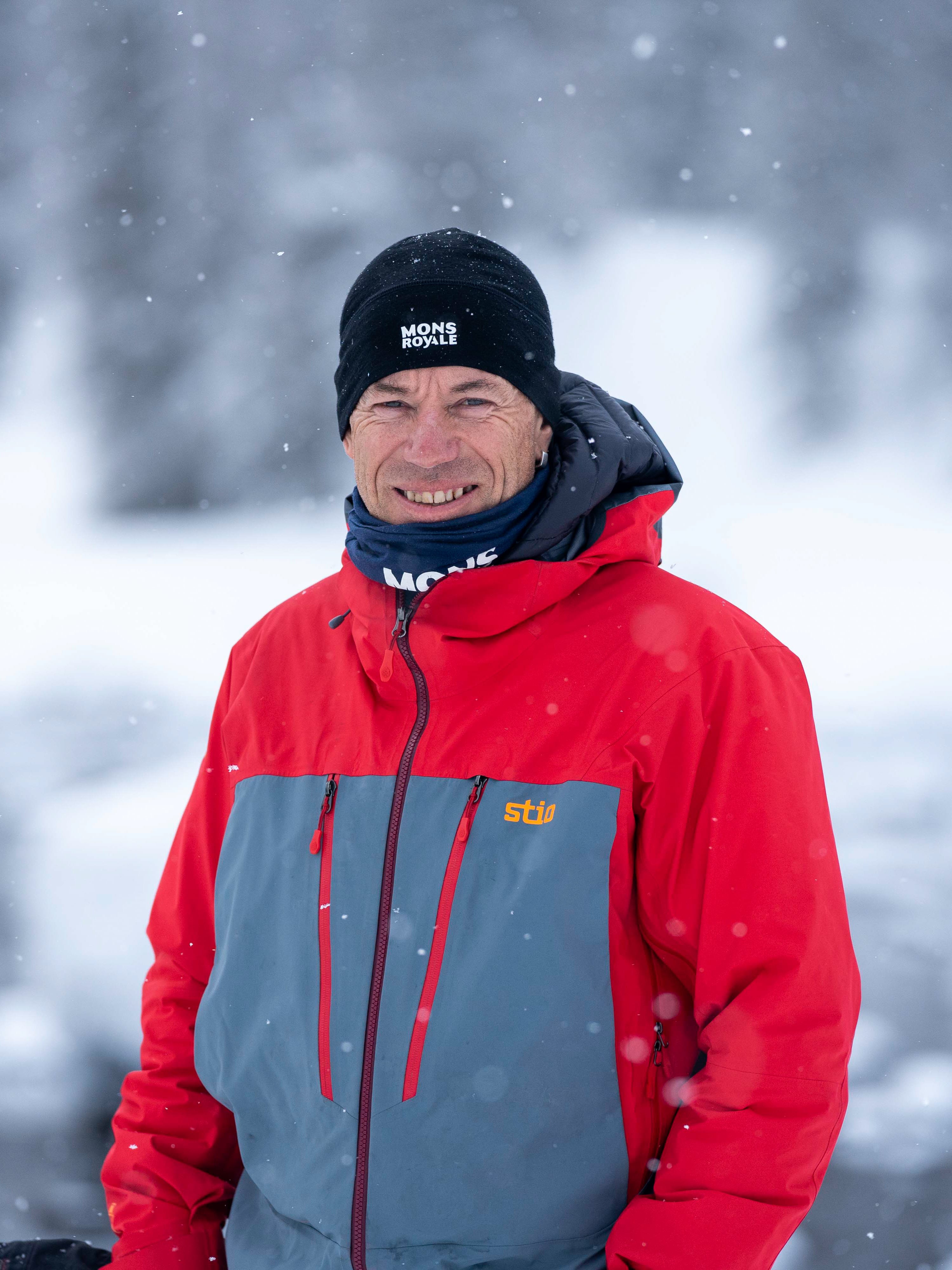 “Kiwi” Hugh has been rattling around mountains for as long as he can remember. A misspent youth passed in New Zealand’s Southern Alps, Jackson Hole, and Chamonix left him with few career options so he became a mountain guide, qualifying as an IFMGA guide in 1998. He has been heli skiing since 1993 and has been Chief Guide and General Manager of Harris Mountains Heliski in his home town of Wanaka, New Zealand, since 1998. Hugh has spent time as the Chief Guide of Himachal Heliski in the Indian Himalaya and running heli ski trips to Western Greenland and Siberia’s Kamchatka Peninsula, exploring new terrain and sharing this experience with guests from all over the globe. Hugh has spent further stints heli guiding in British Columbia and Valdez, Alaska, and ski toured extensively from his family’s European base in Chamonix.

Having accompanied guests to TML in the past, Hugh claims to have found his spiritual home in the Tordrillos and joins the guiding team this season on a full-time basis as Director of Heliski Operations.

When not heli skiing, Hugh runs production, locations, and safety services to film crews specializing in logistics support in challenging environments, work that has taken him to most continents. When not working, Hugh is generally found in the surf. 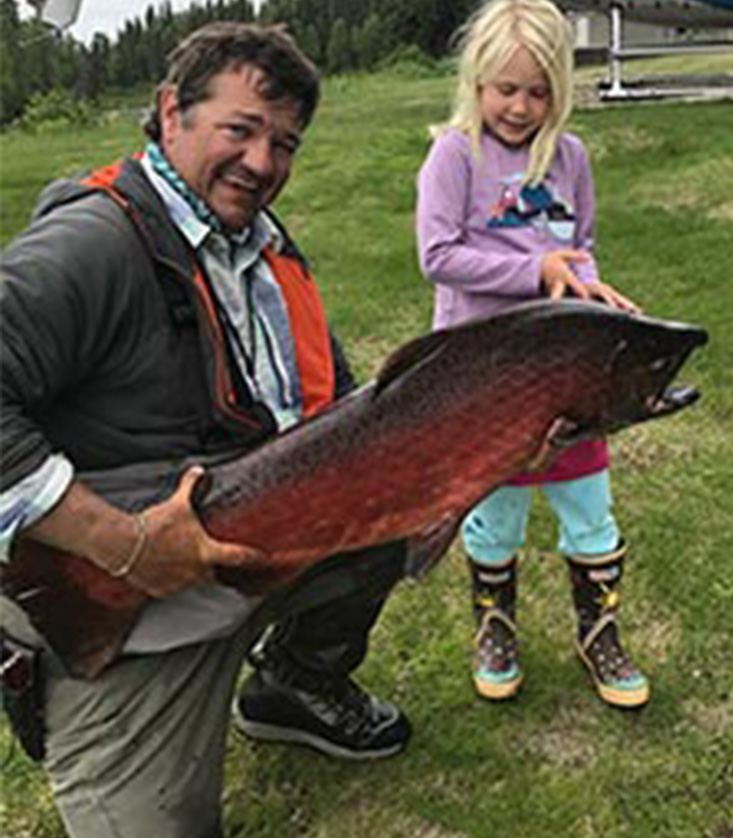 A Jackson, Wyoming, resident, Mike keeps his head in the snow during the winter months running the avalanche program of the Jackson Hole Ski Patrol as well as forecasting for one of the top avalanche centers in the world, the Bridger-Teton Avalanche Center. In the summer months he is the owner/operator of Grand Fishing Adventures, Jackson’s premier fly fishing guide service and shop. He has skied Alaska since the early heli skiing pioneering days of the early nineties. Top priorities for Mike are floating and skiing with his wife and daughter, who are both better skiers than he is. 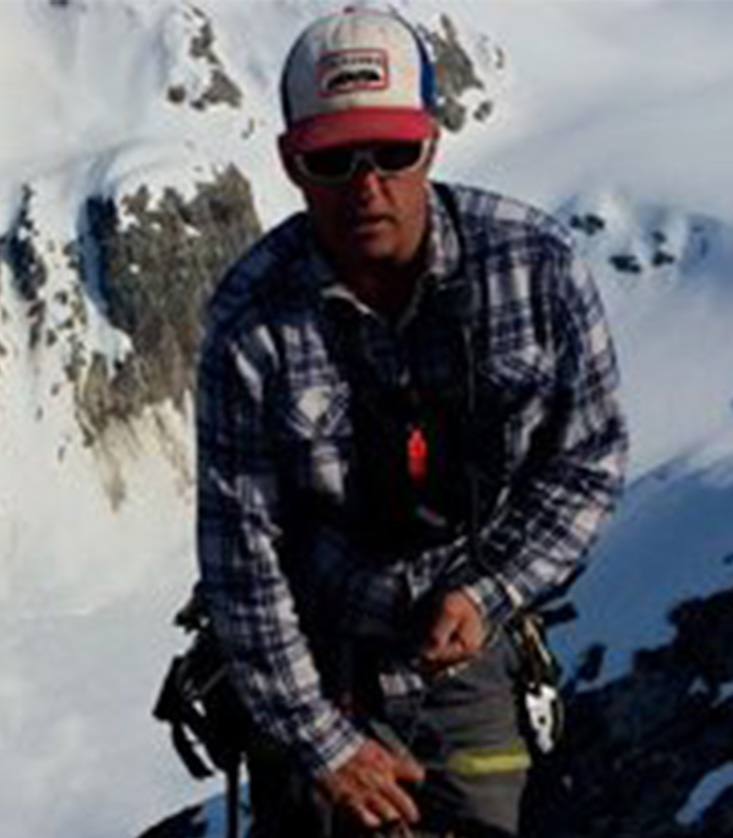 His Alaska guiding experience also includes a decade skiing both the eastern and western Chugach range from Girdwood to Valdez. When not in Alaska, you may find Bill guiding skiing or climbing in France, Switzerland, Italy, South America, Antarctica, Japan, and the western United States. When Bill is at home, he works for Exum Mountain Guides guiding, climbing, and skiing as a senior guide.

Bill says, “Whether it’s repeating a classic line in the Tordrillo mountains or pioneering a new one, sharing the adventure is the most important part!” 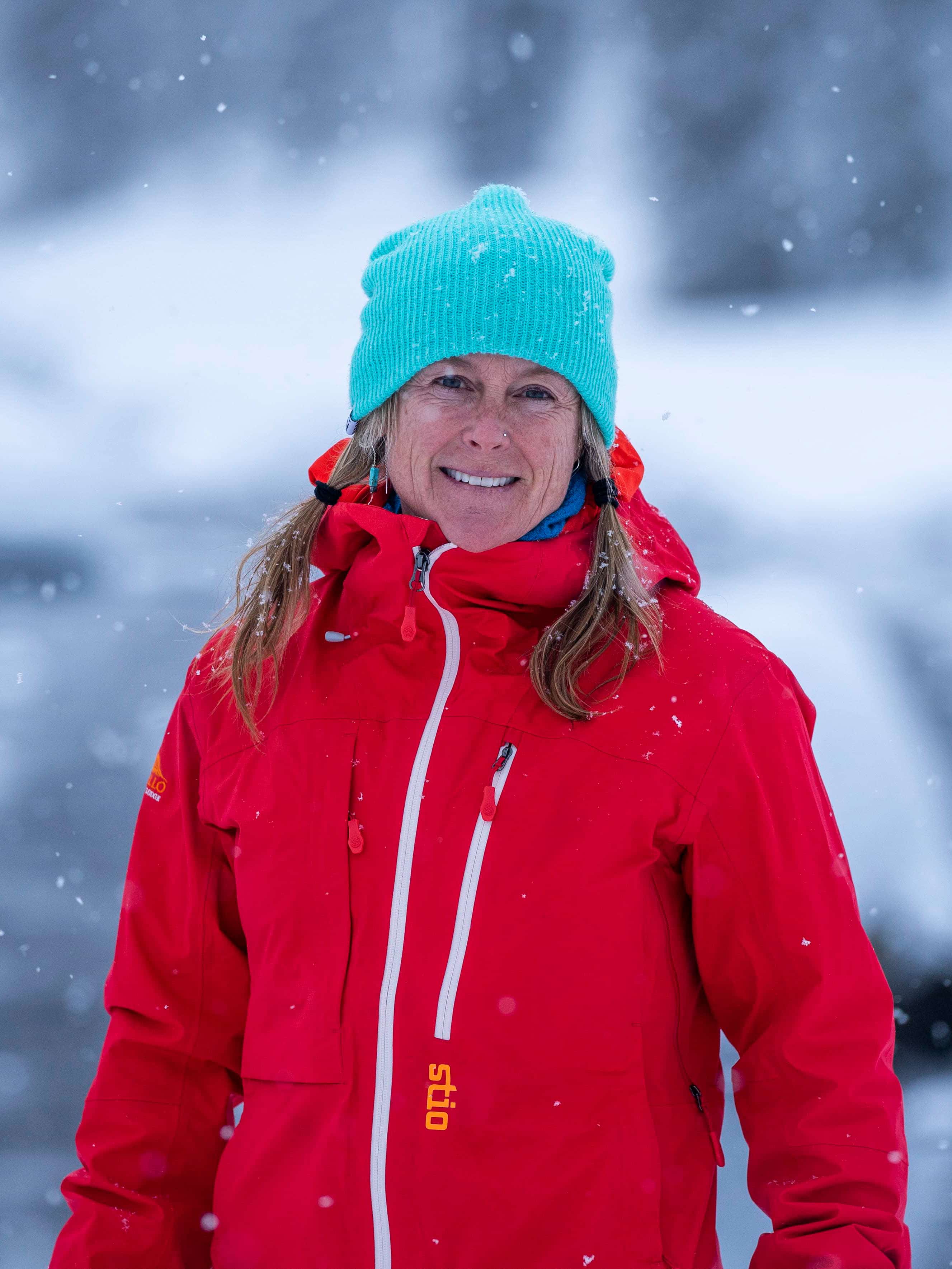 Lel Tone grew up in Switzerland and started her skiing career in the Alps at the age of three. She ski raced during her college years in Vermont and even had a short stint competing in Extreme competitions when she moved to Squaw Valley in 1994. Lel has been a member of the Squaw Valley ski patrol since 1994 and as of 2004 became the Assistant avalanche forecaster there.

Lel has been guiding in the Chugach mountains since 1999 and in 2000 became a guide at Chugach Powder Guides. Lel is a licensed blaster in the state of California and is an Avalanche control route leader at Squaw. She has her Level 1, 2, and 3 avalanche certifications and is an AIARE (American Institute for Avalanche Research and Education) Level 1 and 2 avalanche instructor. Since 2004 Lel has been teaching avalanche courses in the Lake Tahoe area and far beyond in South America. Lel feels passionately about teaching people about the miracle of snow science and how to travel safely in the mountains. She has been an EMT since 1989 and a professional member of the American Avalanche Association since 2000. Currently she holds the Ethics Chair position for the American Avalanche Association and is a Guide member of Heli Ski US.

Last season, Lel was fortunate enough to travel to Kashmir, India, to heli ski in the Himalaya and film with Warren Miller for  ”Like There’s No Tomorrow.” Most recently, she has been involved in designing technical outdoor clothing for Eddie Bauer‘s First Ascent line. The whole experience of creating specific pieces for what she needs to get the job done and the guide built process in general has been a pleasure to work on. 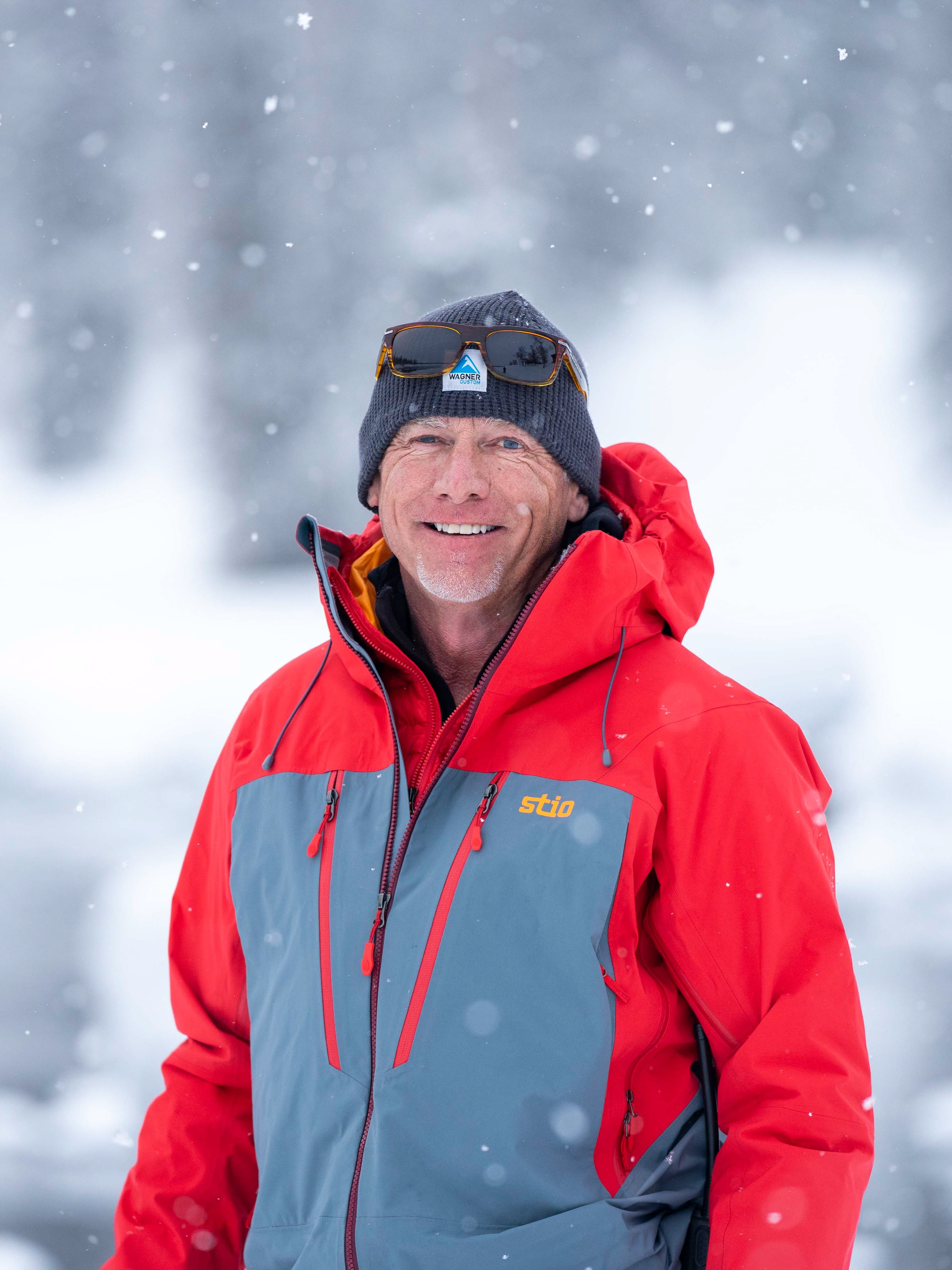 Born in Calgary, Alberta, Canada, Wes Wylie is convinced that he would’ve grown to be six-feet tall if not for a ski injury that fractured his right femur at the age of four at Mt. Norquey in Banff. He continued to ski all over the Canadian Rockies and most major mountain ranges of British Columbia until his first foray into Alaska in the mid 1980s when he spent four weeks climbing/skiing Mount McKinley and he was hooked.

From there, he eventually ended up in Valdez, where he spent 15 years promoting the heli ski industry, ten of which he was guiding. His favorite mountain range has always been the Tordrillos since he first skied them in 1998 with Overcast, Moe, and Nobis. He has oodles of guiding experience in Alaska and Utah and numerous certificates and affiliations including CSGA in 1997, NSP Level III, Avalanche I and II and Guide Member of the US Heli-Ski Association.

If that weren’t enough, he received his medical degree through the University of Texas and completed his residency at the Texas Medical Center in Houston. He’s certified in Advanced Trauma and Life Support, Advanced Cardiac Life Support, Pediatric Life Support and OEC. He currently resides in Park City, Utah, where he is a Private Practice Physician during the summers. 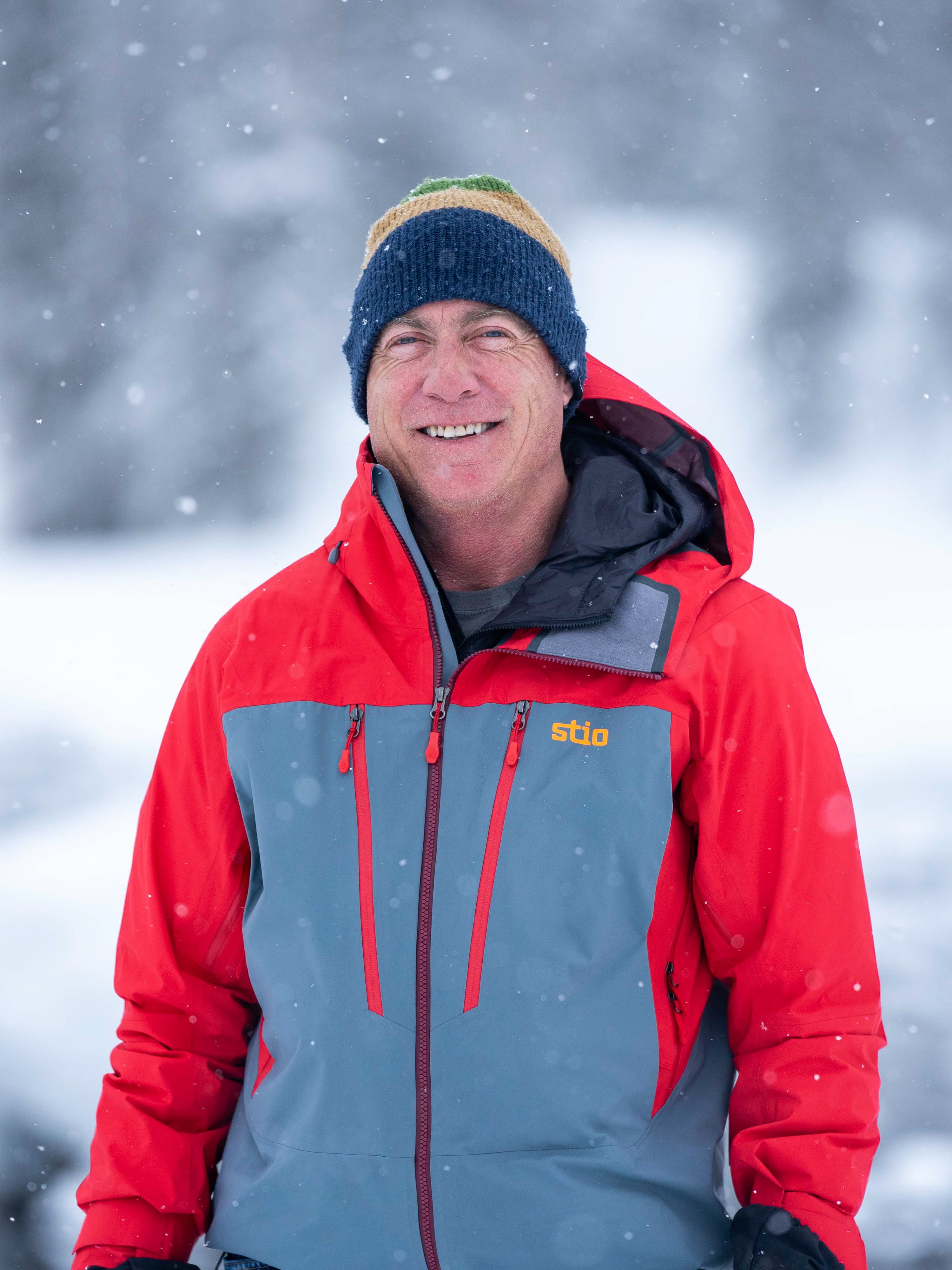 Jon Hunt is one of the finest powder skiers we have on the TML guide roster. No doubt that 18 years as an Alaskan guide, Jackson local, and renowned athlete, make him uniquely qualified to find the powder and keep you safe. Jon is back this season from his medical leave to replace his knee. Expect the same smooth operator, and maybe a little more. Jon spends his early season in Jackson skiing with guests in the JHMR backcountry as a resort guide. Jon skis guests though the best lines…behind the lines. His insatiable desire to deliver the goods takes to a higher level when operating from a helicopter instead of on his feet. His keen eyes can be trusted. For those who get to ski with him, consider yourself in the very best hands. Dave Hahn is a longtime mountain-climbing guide and ski patroller from Taos, New Mexico. He has made a specialty of leading expeditions on high, cold and remote mountains. Notable successes include his fifteen summits of Mt. Everest and 36 trips to the top of Vinson, Antarctica’s high point. Dave routinely guides climbers on Mount Rainier and Denali, and changes things up with a few Kilimanjaro climbs and safaris. He has been recognized for several high profile rescues and, on occasion, for his writing about life in the mountains. 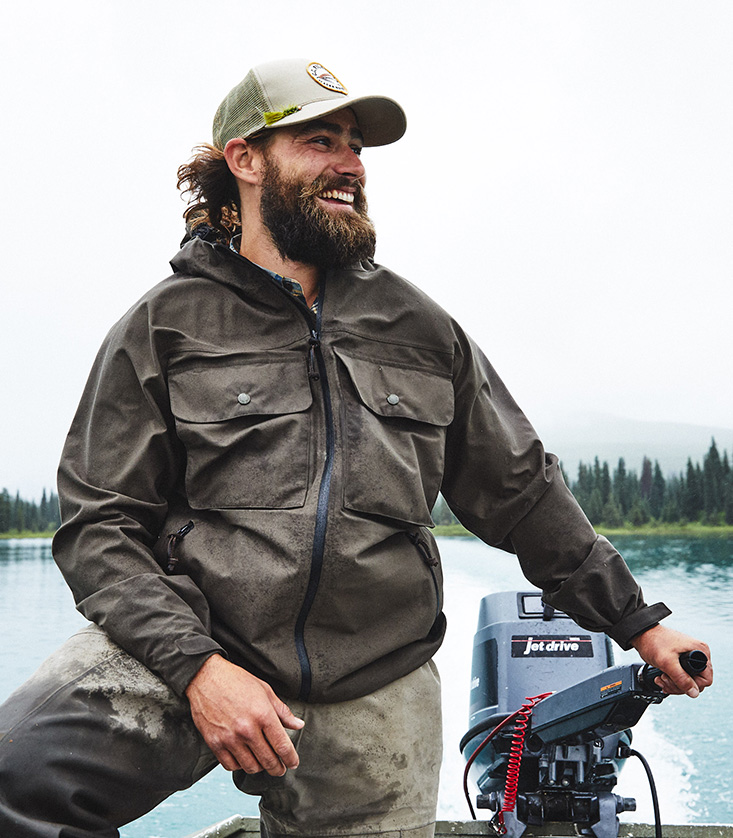 While completing his degree in Outdoor Leadership and Education, Desi started guiding both whitewater rafting and fishing. He has led many multi-day guiding trips around the state with numerous outfitters. In the winters, Desi spent 13 years coaching both alpine ski racing and big mountain freeskiing, and now heli ski guides in both Girdwood and the Tordrillos.

Through his fish guiding adventures, Desi has worked as a producer, logistics coordinator, and guide for various outdoor, fishing, and skiing productions.

Desi has been an integral part of the Tordrillo Mountain Lodge team during both summer and winter programs since 2013. 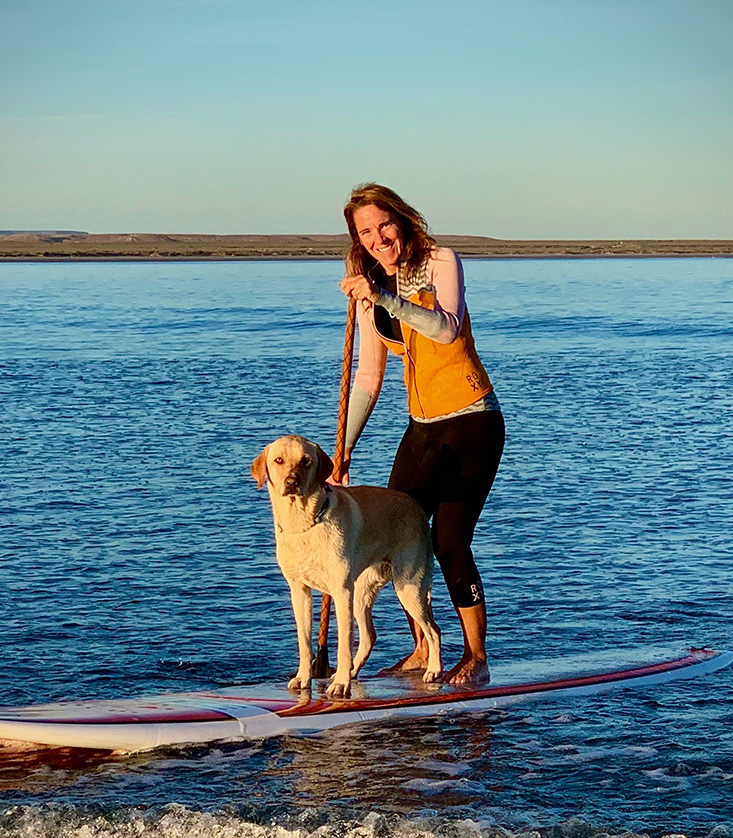 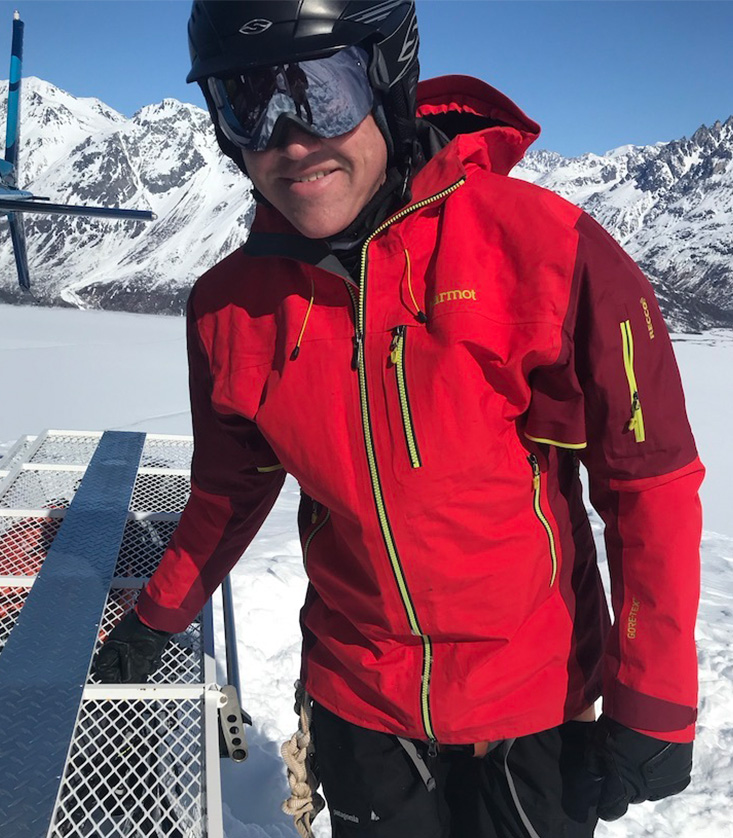 Mike was raised in Anchorage and has been a part of the TML team since our beginnings. As a lifelong skier, Mike naturally gravitated to ski patrolling and avalanche control work at Alyeska Resort to compliment his position as a Battalion Chief and Paramedic at the Anchorage Fire Department.  As a member of the Girdwood community in Alaska for 30 years Mike’s home mountain is at Alyeska Resort.  Mike looks forward to meeting our clients and ensuring that they have the opportunity to enjoy the trip of a lifetime at TML!

During the summer Mike can often be found at his home on Alaska’s Kenai Peninsula in Cooper Landing where he is an avid fisherman, usually looking for the next “big one” in his drift boat.  Prior to his time as a ski guide, Mike also worked as a raft guide and enjoys the helicopter access to the summer river rafting and fishing opportunities at TML.  A Guide member of the US Heli Ski Association Mike is also a licensed Paramedic and certified in Advanced Cardiac Life Support and Pediatric Advanced Life Support. An enthusiastic husband and father, Mike’s also an airplane pilot when he’s not working, guiding or skiing.

If you would like to book a trip or discuss options and availability, please click the button below to browse our packages. After filling out our contact form, a reservation specialist will follow up with you shortly.