Tommy’s taxis fly people into 1.2 million acres of heli heaven in the shadow of North America’s highest peak, Denali (Mount McKinley), at 20,310 feet. The heavily glaciated Alaska Range is on a grand scale and offers endless terrain options to keep skiers challenged, with runs that top out at 7,500 feet and more stable weather than other Alaskan spots. 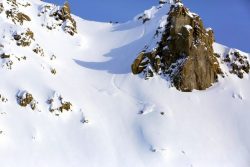 Heli ski with the best guides in the business

Don’t miss out on all of the fun! We still have seats available for the 2016 heli skiing season. Visit our Dates & Rates page for more information.